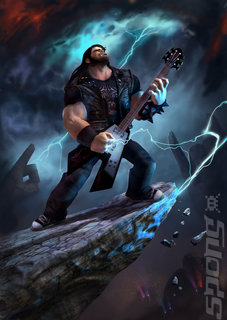 Brütal Legend developer, Double Fine, has filed a counter-suit against Activision, which it claims is trying to kill the Jack Black game-vehicle in order to protect Guitar Hero.

Brütal Legend is currently in the publishing arms of arch-Activision-rival, Electronic Arts.

Activision alleges that it never gave up the rights to the game, making Double Fine's publishing agreement with EA improper.

Double Fine's suit claims that the purpose of Activision's original suit, "is not only to cancel 'Brütal Legend,' but to kill it completely so that 'Guitar Hero' would not have to face the competition."

"Now that we've found a publisher and the game is getting sensational coverage, they want to stop its release", Double Fine's COO, Caroline Esmurdoc, wrote in a statement. "Double Fine's countersuit is a demonstration of our intention to fight for this game: Activision will not kill Brütal Legend."

Fighting talk! Brütal Legend is looking rather good... so let's hope it does get a release.

More mucky detail over with The Associated Press. First, though, you might want to look at this new Brütal Legend video.