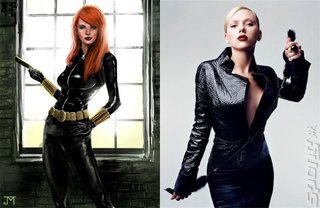 SEGA has confirmed Matt Fraction, writer of The Invincible Iron Man comic series, is the man penning the upcoming game tie-in to the Iron Man 2 movie.

We're promised an "all-new" story ("which includes familiar elements from both the movie and comic book universe"), and enemies not seen in the film, such as Crimson Dynamo (he's like Iron Man, but Russian).

SEGA tells us, "Also new to the game are some powerful hand-to-hand combat styles one of which is kung fu. Iron Man 2 has taken fan feedback into consideration and will have a redesigned control scheme."

As well as having written The Invincible Iron Man, Fraction's done a pretty spiffy job of writing Uncanny X-Men and The Immortal Iron Fist at Marvel, as well as having created Casanova, Five Fists of Science and Last of the Independents.

Hopefully Iron Man 2 will go down a little better than its predecessor, which went down like a bag of bricks with dead kittens in the bottom.

Also, can Scarlett Johansson be in the game as the Black Widow, please?
Companies: Marvel SEGA
Games: Iron Man: The Video Game