Won't be shoved in for the sake of it 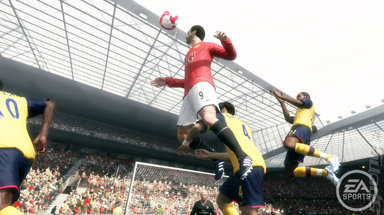 FIFA 10
All Images (4) »
The EA Sports FIFA franchise could feature support for Microsoft's Project Natal and the PS3 motion controller, but it won't be in there just because people think it should be.

Asked whether we'll see support for them in the next game, FIFA 10 line producer' David Rutter said, "Possibly... We'll have to see."

Speaking to Videogamer, Rutter said of Sony and Microsoft's motion control projects that "There are a few things we could do, which we’re thinking about doing at the moment. But it’s not something that’s suddenly going to manifest itself in FIFA 10."

“I’m a big fan of, and I’ve said it a number of times and I’ll say it again, if it’s not good enough it won’t make it in. Don’t just want to put something in because it’s something we’re asked to do or it’s something people think we should. If it doesn’t add to the overall thing, then it’s pointless. I don’t want it to be just this distraction, to be quite honest."

Looking to the more immediate future, EA has confirmed that FIFA 10 will be out on October 2nd.
Companies: Electronic Arts
Games: FIFA 10