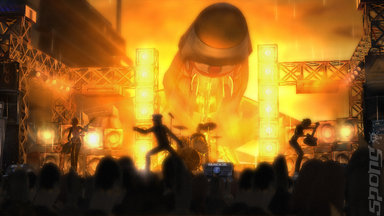 The Official UK Charts Company wants to include downloads through games in the music singles chart.

?We have been in discussion with record labels and the various games companies that host games which allow users to download master recording versions of artist tracks. In theory they could be eligible to be combined with downloads of the same tracks that take place from the wide range of digital retailing services that currently make up our chart panel?, Omar Maskatiya, chart director at the Official Chart Company told MCV.

Makatiya's comment suggests that only tracks that have been downloaded via other digital sources (iTunes etc) would be eligible. So, presumably a wildly successful release of Mr Blobby's Mr Blobby Sings Stuff that is exclusive to Rock Band: Mr Blobby would not make the chart.

Maskatiya noted that we won't see downloads for games such as Rock Band, Guitar Hero and SingStar right away, but his company is looking to "follow through between now and the end of this year.?

Explaining The Official Chart Company's position, Maskatiya went on, "Our brief is to ensure that the charts are the most accurate barometer of the best selling tracks or singles in the UK. And the information we have to date suggests that the incredibly successful Guitar Hero and Rock Band franchises can generate significant volume of master recording downloads that we would like to capture within our weekly survey."
Games: Guitar Hero World Tour Rock Band 2 SingStar