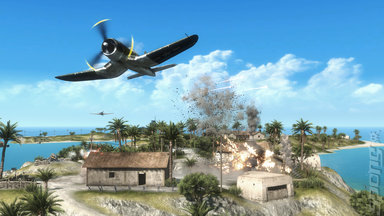 All Images (6) »
EA and developer DICE have been blindsided by the success of Battlefield 1943 to the point where it was effectively 'one in, one out' on the Xbox 360 servers for the multiplayer-only shooter yesterday.

A post went up in the EA forums from the game's producer, Gordon Van Dyke, stating, "Good News, the game is incredibly successful beyond even my expectations. We have reached server capacity, but the bad news about this now some people can't join unless someone leaves. But don't worry, we are adding more servers ASAP to Xbox and in preparation PS3 that should start going up ASAP with priority on Xbox 360."

Further updates followed to state that further servers had been added, mainly in Europe, and that DICE was working to double server capacity for the game. Despite that, later posts in the thread indicate that some players are still having problems getting into games.

Fatpants 9 Jul 2009 16:27
1/4
Why they didnt put the sale of this game on hold once they new there was no room left on servers is beyond me, owned the game 24 hours an not got on once, typical EA Online capability S%@T

Basically, it's Warhawk in the Pacific. With boats. What could not be fun about that?

Hmm, having said that, the flight controls suck. Having pitch and roll on the same stick makes it tough to bank elegantly and pulling a tight turn - bank, pull up, throttle - just doesn't want to work for me and I often ended in the drink. In the end I stuck with using yaw to do all but major manoeuvres.

Also, when I tried to climb to high altitude, the plane seemed to stop responding to control. It may have stalled, but it didn't behave like a stall - just seemed to suffer Gimbal lock. If anything it was like I'd broken through the skydome, wrapped around and appeared underground.

My only quarm is that the maps are huge and you don't always find someone to shoot should be more players then 24 on a map or reduce map size!

Trophies are easy to obtain too!