And a new team emerges 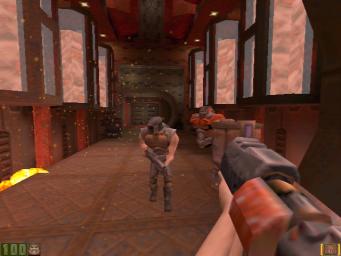 John Carmack of id Software (Doom, remember?) has told MTV that it's all ahead go for Quake and Quake 2 on the iPhone/iPod Touch. Even Quake 3 is likely if Apple gets its act together.

"There?s no doubt that we?ll go through ?Quake? and ?Quake 2.? I think that I can probably manage to do ?Quake 3′ on the conventional iPhone platform, if Apple winds up addressing just a few things in their system software. When you start looking at the 3GS, ['Quake 3'] would not be a problem at all", he says.

On another id-related note, the recent acquisition of id by Bethesda parent company, Zenimax, is apparently changing a few things and giving birth to a new team. Peter Hines of Bethesda tells Adam Hartley:

"We expect id will keep doing what they've always been doing... And that includes the projects they are already working on. They have a team working on RAGE, which will be published by EA next year, and they have a second team working on DOOM 4.

"They'd like to start building up a full third team and, as a result of this deal, they'll be able to do that more quickly than they could have previously with the additional resources they have to work with now."