But he won't be appearing in the new game 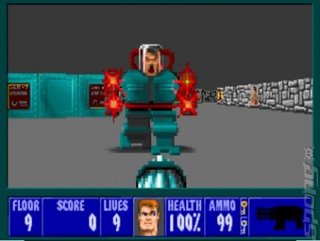 We're all looking forward to Raven Software?s Wolfenstein, right? If not, read our interview with Peter Sokal and Steve Nix, that'll change your mind.

One of the things we loved the most about old Wolfies was the ability to blow Mecha-Hitler to shreds. Well, such fun is not to be had in the new game. Talking to Destructoid, id Software community manager Peter Sokal joins us in our feelings of warmth about obliterating the proto-BNP leader, saying "We love ?Mecha Hitler.? Obviously, he?s one of the classic bad guys in videogames."

But he then proceeds to goose-step all over our hopes, saying, "in this game there will be no Hitler... this time around... it takes place after the events of Return to Castle Wolfenstein." This is, of course, because you destroy Mecha-Adolf in that game.

Slightly more upsetting is the fact that, "For the story we were trying to tell this time, it just didn?t really fit to have Hitler and Mecha Hitler in the game."

So, we're getting real Hitler? Excellent, let's hope we can lob eggs at him before slicing him up with machine gun fire.