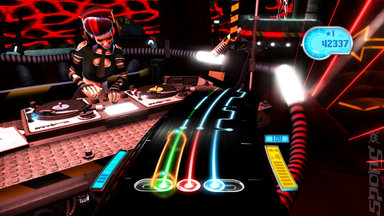 All Images (4) »
FreeStyleGames has confirmed that each and every mashup in DJ Hero will be an original blend of tracks.

Each of the 80 mixes, which make use of 100 pieces of music, will be something never heard outside of the game before, according to Kotaku. FreeStyleGames kept quiet on whether the mixes would subsequently be released outside the game, however.

When SPOnG spoke to the developer's studio manager, Kevin McSherry, he explained how the mixes came into being, saying, "The DJs help us with that side of things. With 16 in our studio, and we?ve got renowned talents on board like DJ Shadow and Z-Trip ? all of these guys work together and look back through crates and crates of records to pick the tracks that we want to play with.

"So DJ Shadow really wanted the David Bowie track Let?s Dance, which is an old favourite of mine, and he wanted to breathe new life into it. It?s been away for 20 years, we wanted to dust it off, give it a new sheen and present it in a new mix for us.

"So really, they?re the guys who help drive us, collect the music for Activision and put it into the game."