Bizarre Creations' Blur: Any Power-Up Story Would be Rubbish

And more to come 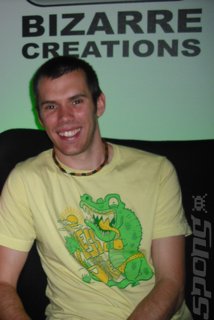 Bizarre's straightforward Mr Ward.
We recently spoke to Bizarre Creations' Ben Ward about Blur, power-ups, stories and why they don't seem to come together... Ben was pretty straightforward:

"Well, we thought about writing a story linking to the power-ups and such, but then we realised that nobody really gives a shit. Let?s be honest, anything you come up with is just going to sound cheesy and rubbish. They?re power-ups? that?s it. That?s all the explanation you really need. And luckily nobody has questioned that so far."

Well, we did. And we asked a bunch more in an interview that you can see between Nintendo and Sony's press briefings tonight. Oh, there's some lovely new graphics to be seen as well.
Companies: Bizarre Creations
Games: Blur