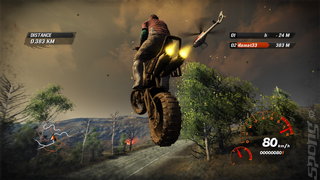 All Images (4) »
Guinness World Records has said that Codemasters' upcoming open world racer, FUEL, has the biggest playable area in a video game ever in the history of the entire world. Ever (Until, maybe, FUEL 2.)

Codies and developer Asobo were handed a certificate by Guiness World Records that said, “Largest playable area in a console game: The largest playable environment in a console game is 5,560 square miles (14,400 km˛), and is featured in FUEL (Codemasters, 2009). The area features rivers, deserts, forests and mountains and was demonstrated at the offices of Guinness World Records, London, UK, on 20 May 2009.”

Some folks think that big is beautiful. Some like the apple of their eye to be a bit more trim. Mark SPOnG tells us that, based on what he's seen of preview builds of both FUEL and THQ's recently-announced MX vs ATV Reflex, the leaner THQ game is looking prettier. But then, he might just like his games all anorexic (the bastard!) For more on that, see Mark's Reflex hands-on here.

To celebrate the whole thing, Codies has released a new video on its official FUEL website. SPOnG also has some new screenage.

Are you excited to race around FUEL's 5,560 square miles of terrain? Let us know in the Forum.
Companies: Codemasters
Games: FUEL

config 22 May 2009 13:57
1/3
OFFS. Surely it wouldn't be difficult to create an infinite world that's procedurally generated and completely playable (thought not necessarily any fun!)

Size isn't everything. If anything I thought it was detrimental in, for example, GTA San Andreas.

Adrian 22 May 2009 15:01
2/3
"Size isn't everything", Is that the philosophy you live by when it comes to your manhood too? Of course size matters, and it's going to be so much to jump online with friends of yours and go explore

gorf 22 May 2009 15:51
3/3
@Adrian yeah loads of fun when your buddies are hundred of miles apart and it takes an age to group
Posting of new comments is now locked for this page.