May make them illegal immigrants 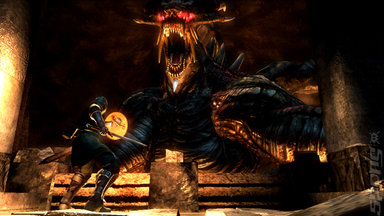 All Images (2) »
Atlus has confirmed that it will take Demon's Souls, From Software's PS3-exclusive RPG, to America.

Atlus boldly proclaims it as the "hardcore RPG experience PlayStation 3 system owners have been waiting for since the platform's launch". It's a dark fantasy with a hefty multiplayer aspect in which you can, "Team up with two other players in simultaneous cooperative play, working together to topple some of the game's colossal bosses, or force your way into the games of skilled players and challenge them to PvP battle."

The game has had a generally favourable critical reception, having been released in Japan back in February.

There's no confirmation of a European release at this point, but with North America getting the game it looks more likely that someone will see fit to bring it to this side of the Atlantic. Rising Star often publishes Atlus titles over here, while Sony put the game out in Japan and may want to repeat the act in Europe.

If you're hankering for a bit of plot, cast your eyes downwards. "King Allant the XII, the last king of Boletaria, searched tirelessly to expand his might. The Nexus, a great ice shrine nestled in the mountains, bestowed the power of the souls onto him, bringing prosperity to his kingdom. Still unsated, he returned again to the Nexus, where he foolishly awakened the Old One from its eternal slumber. This long forgotten evil, now wrought upon Boletaria, plunged the realm into darkness and fog. A mighty demon horde poured into the kingdom, devouring the souls of men", Atlus tells us.

"Champions from other realms learned of Boletaria's fate and sought to deliver the kingdom from evil; none would return from the cursed land. Called upon by a mysterious maiden in black, you go forth, the last hope for humanity in a place lost to demons and darkness..."

Please, when it does get here though... call it Demon's Soul or Demons' Souls.
Companies: Atlus
Games: Demon's Souls