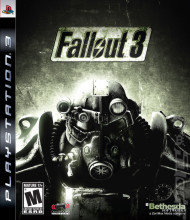 Bethesda has just confirmed that PS3 owners will no longer need to stare at the previously Xbox 360 and PC-only Fallout 3 DLC in envy. It's all heading to Sony's console. There's more, too! The publisher has also confirmed new DLC coming to the 360, PC and PS3 starting in June.

Operation: Anchorage will hit the PS3 in June, followed by The Pitt and Broken Steel at four to six week intervals. The publisher states that hard dates will be "forthcoming". There will be an update provided that will enable PS3 owners to grab the content.

"Mothership Zeta – The aliens have returned, and they’re pissed. Experience an alien abduction first hand and find out if you’re tough enough to survive."

It doesn't stop there, either. More boxed products are on the way. The excitingly-named Fallout 3 Game Add-on Pack #1 has been announced for the 360 and PC, containing Operation Anchorage and The Pitt on disc. It will be released on June 12th across Europe.

The equally excitingly-named Fallout 3 Game Add-on Pack #2 contains Broken Steel and Point Lookout on a disc and will be out for PC and 360 in August.

Neither add-on disc will be released for the PS3.

The other big Fallout news recently (if you choose to forget about problems with Broken Steel on the PC) was Fallout: New Vegas.
Companies: Bethesda
Games: Fallout 3

NoFace 19 May 2009 15:08
1/2
Drat, I was hoping once they'd finished with the DLCs they might make some sort of effort to fix the core game. Guess that's gone out of the window then. Bring on the EU legislation...

Twoozle 19 May 2009 15:26
2/2
NoFace wrote:
Drat, I was hoping once they'd finished with the DLCs they might make some sort of effort to fix the core game. Guess that's gone out of the window then. Bring on the EU legislation...

Frankly, I don't think SPOnG hyped this up enough either... I mean... http://tinyurl.com/o2dhxg thats the way to do it...