Half-Life for Dreamcast is no more

Another sad day for the Dreamcast 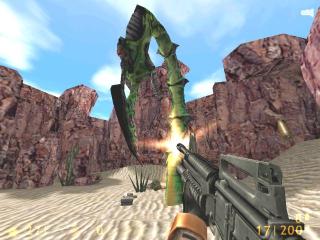 All Images (2) »
Vivendi Universal and Sierra Studios have confirmed that the Dreamcast version of the award winning PC game Half-Life will not be published in any gaming territory.

This news, still as shocking as it is predictable, signals the painful end of a long and tortuous wait for a definitive ?will it or won?t it? from Sierra Studios.

Now the frustration sets in. Half-Life is totally complete and went gold several months ago. Someone, somewhere can play it, and is possibly even playing the game right now.

It seems ridiculous to go through the complete development process and not attempt to recoup any of the costs incurred. The most expensive point in a game?s lifecycle is the development, which takes a lot of clever people a lot of time. The finished product then (hopefully) makes this money back.

In a surprisingly brief statement, the company stated "Sierra regrets the cancellation of Half-Life for the Dreamcast due to changing market conditions." That was the entire statement concerning the game, which, strangely enough, can still be pre-ordered direct from Sierra.

When we called the company this morning regarding any possible future for the game, a spokesman was pessimistic. ?We have not brokered any deal with another publisher,? we were told. ?We know there is a strong supporter base for the Half-Life series and the first person shooter genre in general, but sales for the Dreamcast are not impressive. Games like Unreal Tournament and Quake 3 topped the Dreamcast charts but they certainly didn?t set the world on fire. Put simply, success with a Dreamcast game is, in sales terms, failure with another platform?s game. There are just not enough Dreamcast owners out there.?

Surely the Dreamcast will go down in history as the best gaming machine to completely fail. It is difficult to fathom why, and this story is not the right place to try and understand the ins and outs of the console?s demise. We will have a full investigation into the downfall of Sega?s greatest console soon.