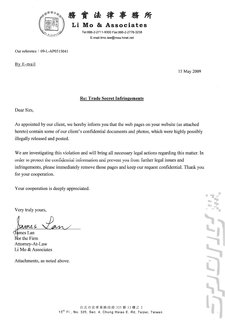 The lawyers move in.
Chinese site, LevelUp apparently had what it claimed to be pix of a new, slimmer, PlayStation 3. Those images have now been removed.

We have also removed the images in question due to ongoing legal issues.

Obviously these could have been removed because the site was embarrassed about having such obvious fakes up. On the other hand, of course, the fabrication plant in China for the new PS3 could have sent the cops around and ordered that the images of a prototype or even new PS3 be removed this close to E3.

Bearing in mind that even The Financial Times is now calling PS3 price cut...

"In its video game business, Sony forecast a 29 per cent increase in sales of the Playstation 3 console, from 10.06m last year to 13m this year.

"Given the fall in PS3 sales since Microsoft cut the price of its rival Xbox 360, that will be taken as a clear signal that Sony intends a price cut of its own later this year."

And these images could be more indicative of a newer, cheaper, console. Of course, they could also be the idle fakery of someone who appears to love truly ugly machines.

ultimateassmonkey 14 May 2009 11:36
2/7
Knowing what the PS3 consists of, I doubt that level of slimming down is achievable.

It's probably like the (Bintendo) Vii which was released as a Chinese cheap alternative to the Wii... May be a PeeS3? Or PSiii?

Yeah but that is just the top case plastic housing they are showing. Not the whole console as a whole. Who's not to say that the pic was taken where the top case housing is being fabricated (if not all the housing parts).