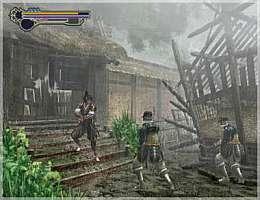 All Images (6) »
Capcom has just officially announced the sequel to the million selling Onimusha, amazingly and originally entitled Onimusha 2.

The new game is being produced by the original Onimusha team and will feature all manner of new and snazzy motion capture technologies specially engineered by Capcom.

The varied game world will feature towns, villages and even a goldmine, all lovingly created in the form of CG backdrops, something that Capcom just can?t move away from. Capcom has stated that it is concentrating on adding polygon-based animation to the CG to enhance the environments. Capcom is also concentrating on perfecting mist and rain effects for the new game.

Onimusha 2 will be released in Japan on March 7th 2002 and in the States and Europe shortly after.