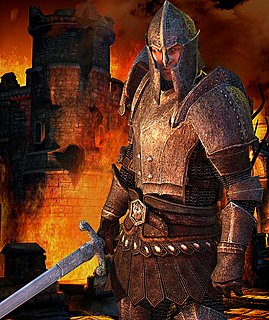 "We're not talking about the next (Elder Scrolls) game, but that doesn't mean we're not working on the franchise", Bethesda's VP of marketing and PR, Pete Hines, told assembled press in London last week. What the devil did he mean? Books! Greg Keyes, New York Times bestselling author of the Age of Unreason tetrology and three Star Wars novels, is on board to pen the books.

The first, titled The Infernal City, is scheduled for release in Autumn. The official bumph tells us, "The Infernal City is set after the events of The Elder Scrolls IV: Oblivion, the latest game in the video game series, and finds the citizens of Tamriel once again facing an uncertain future.

"Floating high above the land is a strange and mysterious city that is casting a horrifying shadow ? wherever it falls, people die and rise again as undead. It is up to an unlikely duo ? a seventeen-year-old girl named Annaig and the Emperor?s young son, Prince Attrebus ? to rescue the kingdom from doom. Annaig and Attrebus? quest will take them through the Elder Scrolls universe and their adventure is sure to add to the series? already magnificent mythology."

At the London event, Hines confirmed that Keyes has been working with Bethesda to make sure the books follow Elder Scrolls lore.
Companies: Bethesda
Games: The Elder Scrolls IV: Oblivion