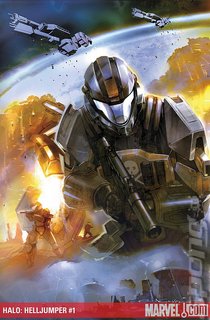 Helljumper, one of the new Halo comics series being published by Marvel, is set to kick off in July according to the solicitations ('catalogue listings', if you don't speak comics) just released.

The listing tells us, "When the colony planet Ariel sends out a mysterious distress signal, it?s up to the UNSC?s elite, highly skilled special-ops Marines, the Orbital Drop Shock Troopers from the 105th, to find out what?s happening. Also known as ODSTs or 'Helljumpers', these soldiers are some of the toughest in the galaxy...and some of the roughest as well.

"When the distress signal comes, two Helljumpers will find themselves at the center of the mystery on Ariel, and before it?s solved, they?ll have to put their friendship?and their lives?on the line..."

The five part series will be written by Peter David (The Incredible Hulk, X-Factor) and drawn by Eric Nguyen (Incredible Hercules, Strange Girl).

Another series, dubbed Halo: Spartan Black, is also in the pipeline.

The last Halo comic series, titled Uprising, just finished this month, having originally been planned to be finished in time for Halo 3 back in September 2007.
Companies: Bungie
Games: Halo 3 Halo 3: ODST