All the stats and the latest shots 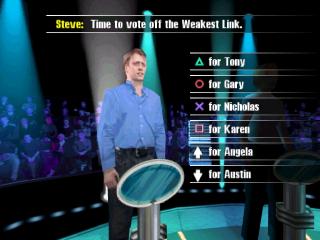 All Images (6) »
Following hot on the heels of ?Waaazzuuppp!? as the most annoying verbal outburst for people with a strong sense of originality, comes ?You are the weakest link, goodbye?, the immortal words of rudeness spat out by Anne Robinson in the BBC?s The Weakest Link. It?s an improvement we?re sure you will agree.

Activision has released the latest shots from the game license it secured earlier this year and although the build is still not complete, it?s looking very realistic.

?We are very excited to team up with such a renowned partner as BBC Worldwide to develop one of its top brands into interactive games,? said Ron Doornink of Activision. ?Activision?s success in building mass-market brands and our international strength makes us an ideal partner for BBC Worldwide. We will recreate the thrill of being a contestant on The Weakest Link by allowing players to face off against other opponents and experience the biting wit of Anne Robinson from the comfort of their own living room.?

The Weakest Link follows on from Millionaire as being the UK?s top gameshow and Activision is expecting massive sales of the game. WWTBAM sold a staggering amount last year and ended up stealing the Christmas number one slot and becoming the best selling PlayStation title. As TWL is far superior to its predecessor, both in design and questions, it?s likely to be hit at retail level.

Here are some of the facts:

A HUGE bank of questions: 100,000 vs 1,000 - therefore the game is extensively replayable...and accessible to all age groups.

A fast flowing game without having to wait around for the same tired FMV.

A charismatic presenter? that is actually present! 7 players, not one.