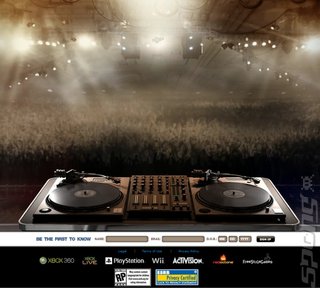 All Images (2) »
Why no details on DJ Hero since it was announced back in 2008? Okay, we know that the teaser site went up in March 2009, but that is still not detail.

It could be because Activision is embroiled in a legal hassle with Scratch DJ Game LLC, a joint venture between Genius Products and Numark Industries.

Activision had tried to acquire Genius and its Scratch: The Ultimate DJ game. Genius didn't want to know. Activision then bought 7 Studios, which was contracted to Genius. A release from Genius now claims that Activision and 7 "began conspiring to prevent Scratch from getting to market on a timely basis by withholding work product, code and the proprietary game controller."

The suit has been brought against Activision and California 7 Studios and its Chief Executive Officer, Lewis Peterson in Southern California. It alleges "that Activision has engaged in intentional interference with contract, breach of contract, conversion and misappropriation of trade secrets obtained from Genius to purchase 7 Studios..."

It further claims that "Activision and 7 Studios have conspired to withhold the current version of Scratch: The Ultimate DJ in an effort to delay the development and release of Scratch and to gain access to proprietary technology. In addition to substantial damages, Scratch DJ Game LLC is asking the court to order the game's immediate return, and other injunctive relief."

Given that the available information comes from Genius and comprises some serious allegations - we'd expect to see a robust response to our request for information from Activsion.