Jak and Daxter Get Lost 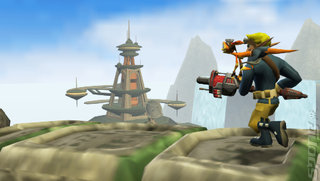 All Images (3) »
Jak and Daxter are making a return to our screens. They won't be making the next-gen, PS3 appearance you might have been expecting, either. The duo will appear in Jak and Daxter: The Lost Frontier on the PS2 and PSP.

As well as the traditional running and jumping escapades, players will also be able to lift off in five different aircraft.

So, what the deuce is going on? Here's what Sony says - "Picking up from where the original Jak and Daxter trilogy left off, Jak and furry friend Daxter team up with their friend Kiera on her quest to become a Sage and save their world from the threat of darkness. As the environment of their planet slowly dies, our two worldly heroes embark on a mission to protect their world from the threat of 'dark eco'."

The game marks the first time the pair have teamed up on the PSP. The previous game on the handheld was all about Daxter.