Just Cause 2: Falling from the Sky 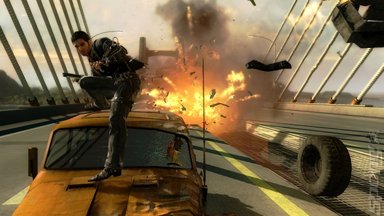 All Images (19) »
SPOnG has some brand new Just Cause 2 screens for you to feast your eyes upon.

SPOnG's been busy chatting away to Peter Johansson, Avalanche's lead designer on Just Cause 2, as it (un-coincidentally) happens. The discussion ranged across a number of facets of the game - one being precisely how the team has been working on the tech behind the series from the first game.

Johansson told us, "The Avalanche 2.0 engine is the result of multiple tweaks and fixes that we discovered during play of Just Cause, and we?ve been constantly maintaining the code since the game was finished.

"A lot of the new features in that engine helped influence the direction of Just Cause 2 ? so the new climate zones allowed us to be a bit more creative with the areas you can go and the weather effects for example."

You can find plenty more in the first part of that interview. Before you head over in that direction however, SPOnG recommends that you check out the new screens below.
Companies: Avalanche Eidos
Games: Just Cause 2