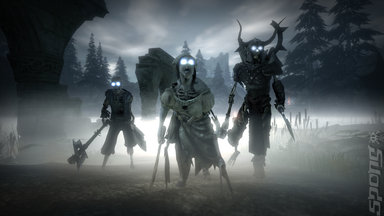 Wondering what Fable III might be like? You won't have to wait long to at least get a taste of what's in the series' future, according to Lionhead boss Peter Molyneux. The upcoming DLC, appropriately called See the Future, apparently offers a hint of what we should expect. Not, of course, that he's admitting a sequel's in the works...

"If we were to take the franchise even further, going on from Fable II, I'm not announcing anything, but if you play See the Future you're going to be getting a flavour at what's going to be happening", Molyneux told Kotaku. "My ideal is what I would want to happen is something big."

He doesn't really need to announce anything, of course. Jonathan Ross already did that for him.

That DLC is not too far away, either. Molyneux noted that the content is scheduled for Spring (which we're allegedly already in) so don't expect to wait months - "think more like weeks".

SuperSaiyan4 27 Mar 2009 13:05
1/3
Tons of people are still having issues with the game even with the so-called patch that didn't really fix much.

I still haven't been able to fully complete the game and here we are again with more content download.

Well I have bought the game twice already because I thought the patch would have fixed all the problems but Peter can go f**k himself and the rest of Lionhead I am not buying the game for the third time.

What problems did you have?

SuperSaiyan4 27 Mar 2009 17:01
3/3
Go on the official forums in the technical section and have a look pretty much everything there.
Posting of new comments is now locked for this page.