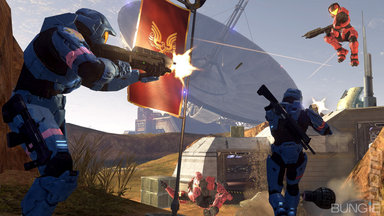 Heroic Map Pack - courtesy Bungie.
All Images (4) »
Judging by a Bungie talk at the Game Developers Conference, the company may be faced with a communications problem. It turns out there's more Halo 3 to come from Bungie, despite the proclamation that the ODST expansion would be the developer's last hurrah on the project.

"Halo 3 took two and a half years to make, and we're still working on it", said Bungie producer Allen Murray in a talk on his studio's production process. "We'll probably be working on it for two more years."

Back in February Brian Jarrard, community director for Bungie, said, "...we are viewing the ODST campaign and the included multiplayer maps as the final exclamation point in our ongoing efforts to extend the Halo 3 experience."

Halo 3: ODST is due out this year. That, in case your maths skills are a bit lacking, is decidedly less than two years away. Either someone at Bungie's changed their mind about Halo 3, or one of these guys is... well, wrong.

In his talk, Murray noted that Bungie has just finished a crunch on ODST and another, unnamed project.

Earlier in the week, Microsoft announced that the Mythic Map Pack Halo 3 DLC will be with us on April 9th.
Companies: Bungie
Games: Halo 3 Halo 3: ODST