Game moved to next financial year 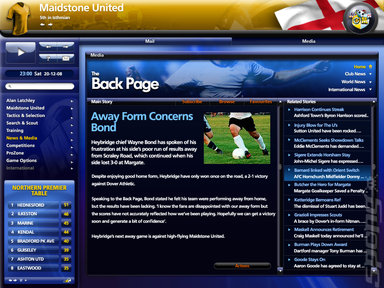 The release of Eidos' Championship Manager '09 has been delayed, the company stated yesterday.

Included in the official statement was this from the company's CEO, Phil Rogers, "We will not compromise on quality and we are confident that this decision is right for consumers and will benefit the continued popularity of this franchise.

"Eidos has a total commitment to producing the highest quality games and we believe by moving the release date of Championship Manager we will give the product the additional time needed to deliver a more polished and highly competitive game within the genre."

This has been taken to mean by many Internet and mainstream observers to mean that the game - a staple in Eidos' (formerly SCi) financial arsenal - has been delayed because it's simply not up to snuff.

However, also included in the official release was this, "In line with Company's strategy of developing the highest quality games, we have decided to delay the release of Championship Manager from April 2009 to ensure we deliver the best game to our customers and maximise the potential for this franchise. As a result, the release date will move into the Company's next financial year.

"This decision will have limited impact on the Company's profitability for the year ended 30 June 2009 as we had built in conservative expectations for this version of the game to reflect the re-establishment of the franchise. We expect to meet our previously stated revenue forecast."

Is it equally possible, therefore, that the game, which has been with us since 1992, may have been delayed in order to come out after Eidos and Square Enix tie the corporate knot? This is due to occur after the EGM, which is scheduled for March 27th. Eidos shares are scheduled for cancellation on April 22nd.

So, a big game release for the new financial year from the newly subsumed company would certainly benefit both Square and Eidos.

Or maybe the game in its current state just needs way more work and it was always going to be delayed... maybe.
Companies: Eidos Square Enix
Games: Championship Manager 2010