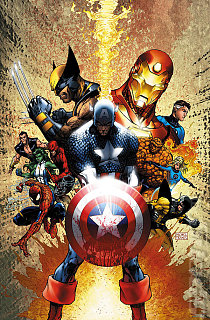 Gazillion Entertainment, a previously enigmatic games developer and publisher, has announced that it has entered into a licensing deal with Marvel to produce MMOs based on the comics publisher's properties.

According to Gazillion's chief executive (quoted in Venturebeat), the deal with Marvel "will span 10 years. During that time, Gazillion will be able to make any number of online games based on any of the 5,000 characters in the Marvel universe."

The project that Gazillion is keen to talk about is based on Super Hero Squad, a heavily-stylised take on Marvel's characters aimed at a younger audience. Characters mentioned thus far for the casual MMO include Iron Man, Hulk, Wolverine, Thor, Fantastic Four and Captain America. The game is being developed by Gazillion's Amazing Society studio.

The company is also working on Marvel Universe, a Marvel MMO aimed at older gamers. Details on that one, beyond the fact it's being handled by Gazillion's Gargantuan studio, remain scarce.

You might remember, however, that such a project was previously in development by Cryptic Studios for publication by Microsoft. That project was cancelled and became Cryptic's Champions Online, apparently because Microsoft was dubious about its ability to compete in the MMO market.

You might be scratching your head as to what credentials a previously very quiet games company has that make it suitable for handling the MMO license for a property as big as Marvel. That's fairly reasonable. It claims that it has been "operating in stealth mode as NR2B Research" until now. The company lists NetDevil, the developer behind Jumpgate and the LEGO MMO (now listed as one of Gazillion's projects being developed by NetDevil, in case you were wondering) as one of its studios.

You might also be wondering how Gazillion comes to be developing a Super Hero Squad game when THQ stated last year that it obtained the exclusive global rights to that franchise. Either that deal contained an exception for MMOs, or it was quietly terminated. SPOnG has contacted THQ for clarification.

This all comes as Marvel has stated that, at least for the time being, it doesn't plan to start developing games internally. "There are different types of games we could do, like MMOs casual games, and console games. But we just started to finance own movies and our own animation.

"We want to see how all of that goes before we start to go down the route other studios are on of financing a wide range of different types of video games. From a licensing perspective, the type of deal we did with Gazillion that gives us a collaborative effort is the way in which we plan to go in the future", said Marvel's worldwide consumer products president, Simon Phillips.

Other publishers that currently hold licenses for Marvel properties include Activision and SEGA.