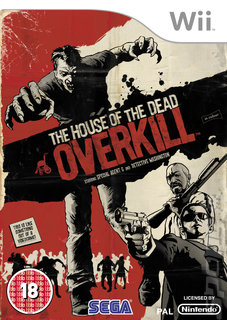 SEGA's House of the Dead: Overkill has been honoured as the title topping the Guinness World Records category for, 'most swearing in a video game'.

Guinness World Records tells us that over the course of three hours of gameplay (which features limited dialogue) the f-word is used 189 times. That's the equivalent of over once per minute and 3% of all words uttered in the game. Impressive!

Video Games Records manager for Guinness World Records, Gaz Deaves, tells us, ?This record category pre-existed for movies, music and television, but The House of the Dead: Overkill is the first video game to be awarded the title in the Gamer?s Edition. It?s a mark of the times.?

What he doesn't say, however, is how many other games were checked and how, exactly, Guinness World Records was satisfied that Overkill is the most foul-mouthed of all games.

Still, Jonathan Burroughs, writer of The House of the Dead: Overkill, is pretty chuffed. ?It is a dubious honour to receive such an accolade working in an industry where so often the fruits of your labours are derided and dismissed for being puerile or irresponsible, but in the case of The House of the Dead: Overkill a little puerility was the order of business. Parodying the profane excess of grindhouse cinema was Headstrong Games? objective and I am flattered that this record acknowledges that we not only rose to that challenge, but entirely exceeded it", he said.

Fair play to them, while its over the top design might tick many family Wii owners off (like we care), its good to see an original take on an IP, that could have easily been a lazy arcade port. Take that Guiness trophy crtificate and run.

Looks like EA and Capcom have a lot to live up to, in this light gun genre.