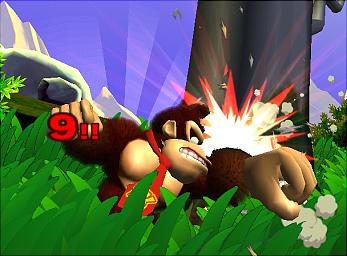 All Images (6) »
Nintendo has confirmed that Donkey Kong Jungle Beat and Pikmin 2 are joining the ranks of its New Play Control! titles, getting an overhaul to work with the Wii's motion sensing controls.

Pikmin 2, following warmly on the heels of the first Pikmin game, is joining the Wii line up on April 24th. No firm date has been put to Donkey Kong Jungle Beat, but it will be out sometime this summer.

Pikmin 2 sees Captain Olimar return to the planet of Pikmin with his assistant Louie in tow looking for some of the good stuff - treasure.

New to the Wii version is the Piklopedia, an in-game list of the plants and creatures you've encountered and the Treasure Hoard, which lists all the goodies you've snatched. You can read more about the original version in SPOnG's original review.

Donkey Kong: Jungle Beat for the GameCube was a platformer that used bongos to control the ape. Now, Nintendo tells us, "The movements of Donkey Kong are controlled through the motion-sensing capabilities of the Wii Remote and Nunchuk controllers ? swing them in to unleash attacks on and direct soundwaves at your enemies!"