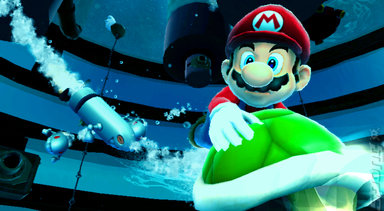 The UK video game industry's night of respect and respectability has come and has gone with the coveted British Academy of Film and Television (and video games), BAFTA(aVG)s being handed out.

Before anybody gets too blustery about this, we've actually got some insight into how the awards are voted on. We're pleased to be able to report that it's not simply down to a bunch of blokes in suits emailing each other with statements such as, "Er, that Boom Blox looks Okay, it's Speilberg isn't it? Let's give it to that. See you down The Ship later."

Voting is a secretive process that follows the fact that the judges have actually played the nominated titles and then... actually discuss the pros and cons. By the way, you can see all the noms (as we're sure they're called down in London) right here.

The big winner last night was Call of Duty 4: Modern Warfare, and who can really argue with its Best Game and People's Choice. Its Story and Character award could be a little contentious... but only a very little bit.

Not, for example, as contentious as Best Game, which went to Super Mario Galaxy. It was in a strong field consisting of COD4, Fable II, Fallout 3, Rock Band, and the expected victor, Grand Theft Auto IV.

In a Benjamin Button at the Oscar's kind of a way, GTA IV, left the building without an award to its name - despite seven noms.

Clearly, I would have had Burnout Paradise win something if it were down to me. But it's not. But seeing Dead SPace get plaudits for Audio and Left4Dead for multiplayer really makes you think the panelists were getting to the nub of matters.

The only one I strongly disagree with is Race Driver. Not that it isn;t a great game, just that Paradise and Motorstorm 2 are both (for me) so much better.

Strictly Anonymous 11 Mar 2009 10:42
2/4
I agree about Paradise. If my sources are correct, EA only put Paradise forward for one category, which seemed like a strange decision on their part. I think it's the best multiplayer game (and 'sports' game, in a category where DIRT, MS and Pure are considered sports) I played last year, but it didn't get a look-in because of EA. Shame.
more comments below our sponsor's message

some guy 11 Mar 2009 11:04
3/4
nah i think race driver grid deserves what it gets, the best driving game ive ever played by far, although i have yet to play paradise i dont see how it could be that much better