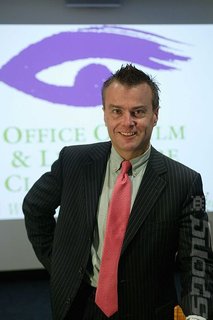 Kiwi Chief Censor: Bill Hastings.
New Zealand's chief censor, Bill Hastings, has said that prosecutors dealing with parents who ignore age ratings on games and give them to under-age kids should take a harder line. Speaking to NZ publication The Dominion, he advocated both jail time and fines of up to $10,000.

"They might think the offence is silly, but it ain't", says Hastings of parents doling out mature titles to their kids.

While New Zealand censorship law provides for jail terms of up to three months and fines of up to $10K, Hastings apparently doesn't feel prosecutors are being tough enough. No one has yet been prosecuted under the legislation. He wants to see more done with it, while not wanting measures to be taken to extremes. "That's what the law says, but ... you're not going to have police officers in every bedroom", he said. "There would certainly be some shock value to prosecuting a parent who gives their under-18 child access to a restricted game. It would send out a message that the enforcement agency means business."

Hastings indicated that he wants parents to get the message that games aren't just for kids. "I think the word 'game' can mislead people for sure. It's not checkers."

Hastings also indicated that he intends to ask NZ's Internal Affairs Ministry to re-visit the Films, Videos and Publications Classification Act and modify it so that all games must be rated. Currently, as with the UK and BBFC, only titles with objectionable content must be subjected for rating.

New Zealand doesn't have the reputation for tough censorship that it's neighbour, Australia, does, but it did ban Manhunt 2 from sale, making it an offence to own a copy.

Trying to turn New Zealand into what Australia once (prison colony) was isn't a great idea, especially when there's better places to live in the world.

This is up there with Tony Blair's brilliant, 'march a person to a cash machine, to pay for an ASBO' idea.

Farmer Tom 9 Mar 2009 21:59
2/2
You have got to be kidding. This guy needs to have his head replaced. It's one thing to suggest someone (over 18) supplying a media object (book, dvd, cd, game) which the law says is for people who are not minors should be prosecuted, but to suggest such prosecution for *parents* is insane and suggests that legislative wisdom trumps that of parents. As a parent of four sons, 12 to 22, I would not allow the government to have *the slightest impact* on what *I* choose to allow my children to watch, read, hear, or play. Hastings might want to hasten away and rephrase his whine about enforcement so that what he is advocating serves the interest of the people and the law without trampling on either.
Posting of new comments is now locked for this page.