Microsoft says it best, when it says nothing at all... 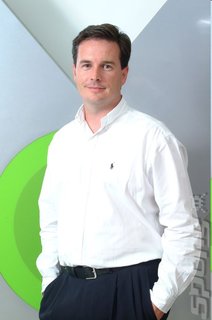 Neil Thompson
It would seem that Neil Thompson, (Microsoft's senior regional director for the Entertainment and Devices division in Europe) doesn't think a lot of the gaming public's spending habits. Basically, he just seems to think that if Microsoft gives us plenty of choice, we won't care about what it is we're actually choosing.

Speaking in an interview Thompson told GamesIndustry.biz, "Quite often it's just about having the choice, irrespective of what within the choice they use, they still want to see the choice. That's how I think about it - so therefore, what an individual piece does to the whole is quite difficult to judge specifically."

This has transcended simple corporate speaking and has entered a new circle of what we've decided to call "meta-linguistic acrobatics" because it sounds as if it makes as much sense. Let's try to translate from MLA into English:

"People like to have a choice. It doesn't matter what things are in that choice. This is because all people want is choice. Because of that, estimating how good or bad any of the items in the 'choice' is can't be done because the individual items aren't the issue." Nope, we can't actually translate. Maybe a business-minded SPOnG reader can help us?

Specifics seems to be what Thompson wants to avoid getting into. He won't give specific figures on how Live is doing in the UK, all he would utter was, "What I can say is that we have 17 million Xbox Live subscribers worldwide that are very active, and all of our download content - especially in the UK - is above where our expectations put us."

Asked about whether one particular aspect of Xbox Live's downloadable offering needs any more attention, Thompson said, "The way I encourage people to think about this is that we're trying to make the Xbox 360 platform as completely compelling as a whole platform. What we feel you have to do is have a variety of different entertainment experiences that people will want to consume at different times, for different reasons. And different types of people will want to consume them. So we tend not to look at individual pieces and ask if it's doing well as a piece."

So... it's OK for one area to be crap, so long as there are other aspects of the service to pull it up? Really?

If you don't remember what former Xbox boss Peter Moore had to say about PR handling at Microsoft, SPOnG suggests you go back and have a look, then admire what a fine job the company is doing at stopping its employees talking about much of anything at all.
Companies: Microsoft
People: Neil Thompson

If Mircrosoft make 1000 games for the xbox, people like to see there is a choice of 1000, despite the fact they will only ever buy 5 games in the whole console cycle, for example. It's nice for them to know they can play percentages and find another game out of that 1000 that they like. If the PS3 had only 500 games, they would see less of a choice and be put off as there would be less chance of finding a good game (obviously not necessarily true but you have to play percentages).

OptimusP 3 Mar 2009 18:47
2/6
I think he's "saying" is that people want choice out of a product and that Microsoft gives a lot of choice. Microsoft does this trough the Xbox Expercience thing with it's many entertainment options and he believes this coming togheter of seperate features as a complete expercience is more important then making each seperate branch better.

Also, he's clearly was doped when doing the interview. Another fun thing is, we can blame the British for this!

All PR's have their moments but seriously...Microsoft PR's are stupid.

Brian 3 Mar 2009 21:09
4/6
He should run for some office because he sounds like a politician. Just a bunch of mumble jumble nonsense.

Nije 5 Mar 2009 12:36
6/6
If there was any problem with Xbox lives offering in the UK, it is only that the only option for downloadable films is overpriced considering it doesnt stream, it takes hours to download.

520 points for a HD movie from a poor selection is no alternative to the USA netflix service.