Killzone 2 shoots to the top 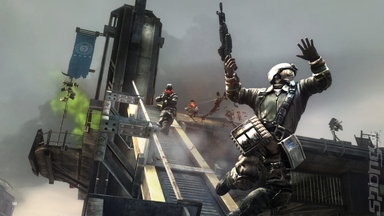 Okay, do people prefer shooters to real-time strategy games? People prefer Killzone IP to Halo IP? More PlayStation 3 owners had money to spend last week than people with Xbox 360s? The answers to these questions maybe be debated long and hard in intelligent, well thought-out exchanges between sensible, articulate gamers on forums (fora). But the fact is that the PS3 exclusive, Killzone 2 has beaten the Xbox 360 exclusive, Halo Wars to the Number 1 spot in the UK video game charts - compiled by Gfk Chart-Track and copyright ELSPA.

According to Chart-Track, "Killzone 2 becomes the 4th fastest selling Sony published title ever in the UK (2nd fastest on PS3 behind GT5 Prologue." Also, "It is Sony’s first All Formats No1 for almost two years: their last All Formats No1 was at the end of April 2007 with God of War 2 on PS2".