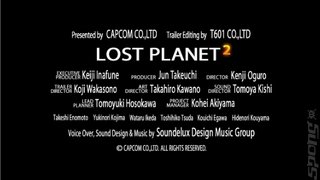 All Images (12) »
The Lost Planet 2 trailer has been let loose on Xbox Live - and by all the gods of video gaming it looks very impressive indeed.

The Capcom follow-up to its 2008 frozen combat hit (which we quite liked) features all the snow and fighting you'd expect. However, the trailer also shows that global warming (or somesuch) as taken its toll to reveal green... green jungle and more.

Frankly, if the in-game action - using Capcom's proprietary engine, the MT-FrameWork 2.0 - from the trailer is anything to go by, we're all in for something incredibly impressive. With Resident Evil 5 producer Jun Takeuchi taking his talent to the sequel, there's also more than a climate changed environment to contend with. The game moves away from a focus on one main character and instead gives the player the chance to see the conflicts and interactions play out among a range of Snow Pirate cadres.

Anyway, take a look for yourself. It's the second time in a month that we've been "Oooh, that looks smart!" about a trailer with in-game footage. Don't forget GOW III.

Anyway, check it out yourself below:

Could this be what MS are saying will be their game to beat KillZone2 5 Mar 2009 01:16
1/1
If so I don't think it's quite better then KZ2, but time will tell I suppose.
Posting of new comments is now locked for this page.