What an exciting week for games. 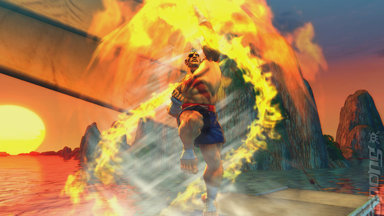 Week eight of 2009 and all of a sudden the UK all formats video chart (compiled by Chart-Track but copyright ELSPA) starts to lose the post-Xmas fug and start to look interesting.

Smashing its way into the Number 1 spot comes Capcom's Street Fighter IV. And it was a smash, according to Chart-Track in a convoluted piece of praise, the game is "the fastest selling traditional beat ‘em up since the All Formats Chart began back in 1997."

It is also "the biggest selling All Formats No1 of the year so far", which is rather more impressive.

The sales split went: 53% of sales were on PS3 and 47% on Xbox 360. Now, this might come as a surprise for the biggest-selling AF Number 1 of the year so far, as the PS3 has been receiving somewhat of a battering in terms of sales of late. Maybe a set of Sony/Capcom loyalists have simply been waiting for the release of the game to show their love. Whatever the reason, it's good news for the console.

Another platform that receives a chart-boost is the PC. Yes, it's a strangely energised chart this week with even the PC getting an entry at Number 3 with THQ’s Warhammer 40,000: Dawn of War II.

That's not the only new entry however, publisher D3P sees cult hero Ben 10 doing the business with Ben 10: Alien Force. So, not only does that see a new game for the chart, but it's also a first-time experience for the publisher. All this newness in the chart could be quite disconcerting if it wasn't for the freshness and general life it brings to a listing that has in recent months looked like a stagnating pool in which EA, ActiBlizz and Nintendo were the only things to be seen.

Then, of course, there is the return of an old favourite. Well, several old favourites actually - and then only favourites if you didn't own a Nintendo: the SEGA Mega Drive Ultimate Collection rushes in a Number 7. Replete with quite a few of your best gaming memories it's a pack that we felt might do better as an Xmas sale... but we were wrong. We are not, however, wrong about asking: "Where the bloody hell are Afterburner, Gunstar Heroes and Outrun to name a few?"