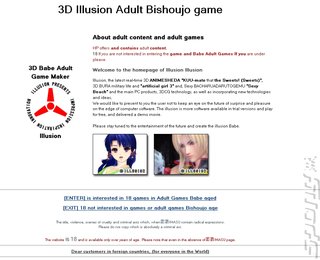 Online retailer, Amazon, has removed what is being called a "Rapelay" game from its virtual shelves. The game - from Japanese publisher Illusion - is apparently legal in Japan but not for sale outside of that country.

According to news reports, "a couple of 'like new' copies were being offered on Amazon by a US seller specializing in animated Japanese pornography."

A spokesman for the Japanese game maker - which specialises in 'Adult' gaming commented, "We believe there is no problem with the software, which has cleared the domestic ratings of an ethics watchdog body."

The company should not be confused with the Houston, Texas-based, Illusion Studio which specialises in "full production 3D computer animation".