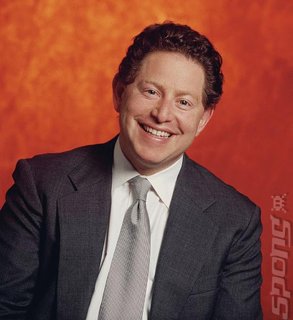 Bobby Kotick
Activision CEO, Bobby Kotick, has sent out a clarion call for Microsoft, Sony and Nintendo to cut the prices of their respective games consoles.

"The hardware companies are going to need to reconsider their pricing. Given the difficult economy, a lower-priced PlayStation, XBox and Wii would be a big benefit to consumption", was his plea following the release of his company's financials.

Despite talk of the video games industry being recession proof, both the big gun publishers - Activision/Blizzard and Electronic Arts - as well as other key players such as SEGA are all predicting that 2009 will be a poor period for games sales. Only Kotick has called for the hardware makers to take a lead in price cutting.

In terms of his own company's most recent financial quarter, however, Kotick had good news. "Activision Blizzard has delivered record December quarter and calendar year 2008", he told investors.

"Our balance sheet remains strong with no debt and more than $3 billion in cash", he continued. In fact, bullishness was the order of the day, with Kotick stating that, "In 2008, we had four of the top-10 best-selling games worldwide for the year. Ninety percent of the top-ten best-selling games worldwide were based on proven franchises, validating our strategy of a focused product slate with high-quality titles based on well-established brands.

"We enter 2009 with the finest product slate in our company's history and an organization properly sized and resourced to compete alongside the many new entrants and existing competitors in our industry.

"During the year, we will continue to employ our proven strategies that have worked so well for us over the last decade."

The phrase, "Proven strategies" does not auger well for new IP.

The FT further reports that, "However, its shares fell as much as 9 per cent in after-hours trading to $8.60 as forecasts for its March quarter of $550m in sales fell short of analyst expectations of $628m."

Reuters is actually quite brutal in its appreciation of Activision/Blizzard's outlook. It headlines a piece today: "Guitar Hero fails to save Activision". In it, it states, "The economy is so bad that even the company behind Guitar Hero, the hottest video game franchise in the world, couldn't muster a profit in the holiday quarter".

The analysts at Reuters explain that, "Activision Blizzard on Wednesday posted a $72 million net loss in the fourth quarter, compared with an $86 million profit last year."

So, will Acti/Blizz travel the same cost-cutting routes as SEGA and EA? Not according to Kotick, "We won't be distracted by layoffs and restructuring and things that other companies are going to be distracted with.

"We don't respond to managing our operating expenses because there's a financial crisis, we do it all the time."

SuperSaiyan4 12 Feb 2009 12:54
1/2
All this guy ever does is moan about console prices!! Microsoft have really knocked down the prices of the Xbox 360 on top retailers are offering mega value bundles to boot yet this guy still moans. Maybe they should drop the price of their games that will seriously help.

alexh2o 12 Feb 2009 14:18
2/2
Considering the Wii still sells like hotcakes and the Xbox is practically being given away these days... anyone else think this is more a hit at Sony?
Posting of new comments is now locked for this page.