Plus: more details on the Mythic pack 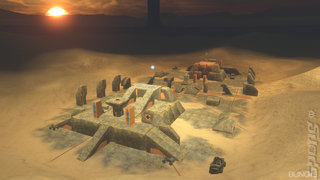 Sandbox
All Images (16) »
Update: The Austrian blog posting that leaked the original image has been removed.


Following a leak on the Austrian official Xbox blog, Bungie has released an image showing the layout of the Sandbox map from the upcoming Mythic pack. You can see it to the right of these very words - click for a larger view.

The Austrian blog also provided descriptions of all three maps - the other two being Assembly and Orbital - which you can find translated at the bottom of this story.

The official word from Bungie is still that the Xbox Live general release of the Mythic Map Pack will be "later this spring". The Austrian blog states that it will cost 800 Microsoft Points. If you don't want to wait for that ambiguous date, you'll be heartened to know that buyers of the Halo Wars Special Edition will be able to get the maps early when the RTS is released on February 27th.

"Assembly: Set in the heart of the Covenant Scarab factory. Two identical bases on opposite sides of the map, offering the best conditions for Slayer or Capture the Flag

SuperSaiyan4 30 Jan 2009 12:12
1/1
Load of crap, I seriously wish Bungie would bring out a graphical update to get rid of all those jaggies and make things look nicer along with fairer online gameplay.