Report on The PSN not true 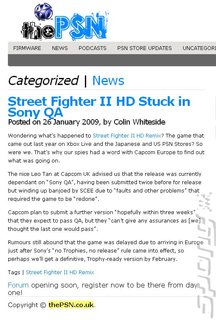 The original story.
All Images (2) »
SPOnG has been told by Capcom representative, Leo Tan, that a report on The PSN quoting him as saying that Super Street Fighter II Turbo HD Remix has been delayed on the European PSN because of problems with Sony is "a total fabrication".

Tan told SPOnG the following, however - "The PSN's story is a total fabrication. There is no truth to their statement, I have never spoken to them. All I can say is that we are keen to release Super Street Fighter II Turbo HD Remix on PSN in Europe and we understand that demand for this game is high. We're looking to resolve the situation as soon as we possibly can."

HD Remix was released on Xbox Live and the North American PSN back in November. With Capcom not commenting on the reasons for its delay over here the problem remains shrouded in mystery.

The PSN has since updated its story to say that it "name-checked the wrong person at Capcom UK". It has now changed the reference to 'Leo Tan' to read 'Capcom UK'. With the story having originally directly quoted someone who has since said their story is a "total fabrication", however, it looks shaky at best.
Companies: Capcom
Games: Super Street Fighter II Turbo HD Remix

Personally unless there are hardcore SF fans on the PS3 they are not missing out on much, I have some friends that are totally into SF but they dont even play it anymore.