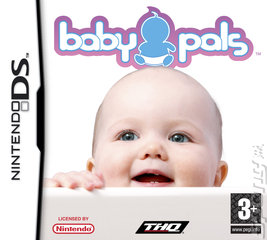 Some parents in the United States of America are going a bit potty, accusing a Mattel Doll and a Nintendo DS game of young girls into a lives that are "worse than apartheid".

Baby Pals, which comes from Crave Entertainment in the US and THQ in the UK, would seem to contain a phrase that is particularly offensive to the parents in question. The phrase also falls from the mouth of Mattel's Little Mommy Real Loving Baby Cuddle & Coo Doll.

Before telling you what that phrase is, let's try an experiment requiring honesty, listening and a bit of writing.

Here's the audio from Mattel. Listen to it before reading the rest of the story. Right down what you hear. Tell us on the Forum. Then read on.

Here's what Rachel Jones told US TV channel WTNH about what she thought the audio says: "We were sitting in the kitchen, and she was playing it", said "All of a sudden she looked at me, and I looked at her and she said, 'Mom, I think my baby said something.' And so I played it back, and it says 'Islam is the light.'"

It appears that Rachel's even being targeted by this message, having previously bought her daughter Mattel's Little Mommy Real Loving Baby Cuddle & Coo Doll.

The doll's 'sinister' outpouring has lead to the formation of a pressure group called Moms Ask Mattel for Accountability (cleverly, MAMA). The group "is a public education effort by concerned families to protect children from being invited to join Islam, without their parents? knowledge or permission."

MAMA will tell you exactly why it's so wrong for a children's toy to have a phrase mentioning Islam here. Apparently one reason is that listening to a phrase that might or might not be there will inevitably lead young girls to follow Islam. This in turn will result in the girls suffering a fate worse "than apartheid" under Shariah Law.

Says MAMA, "we have also started this campaign to educate retailers, state and federal government officials, our communities, fellow parents and Mattel itself about the very real threat to the civil liberties of girls under (sic) Islamic legal doctrine of Shariah."

It's dubious whether the game and doll do in fact contain the words "Islam is the light". Mattel said in a statement, "The only scripted word the doll says is 'mama.' There is a sound that may resemble something close to the word 'night, right, or light.'"

Nintendo has declined to comment as the game was made by a third-party. Crave has yet to respond to the allegation while no comment was available from THQ at the time of publishing.

Chris Schaden, senior VP of sales at Mattel said, after Mattel apparently did some research, "if told to listen for a particular phrase, you may hear something similar due to the power of suggestion."

Therefore we'd like to propose that a developer uses the phrase: "Guns don't kill people" in a game and see what MAMA logic does with that.

As for the idea that some kind of Jihadist conspiracy is afoot in terms of US kids' toys: we're currently looking into who does the localisation for these Mattel and Nintendo products. Possibly the same place... with the same audio loop? No! More likely it's a huge conspiracy.
Companies: Crave Mattel
Games: Baby Pals

evilbabyvoicenmyheed. 31 Jan 2009 10:27
1/4
yes the second part of the message does. but the first part is more disturbing. ey ey ey ey ey boonnnnggggg nnggg nggg
Sounds like and a drug reference to me.

Jeff 2 Feb 2009 22:27
2/4
Without commenting on what it's actually saying, it sounds a *lot* like what the doll said. I'm trying to decide whether they must've used the same stock audio, or whether the game makers did it on purpose as a joking tribute.
more comments below our sponsor's message

Tim Smith 3 Feb 2009 01:33
3/4
Jeff wrote:
Without commenting on what it's actually saying, it sounds a *lot* like what the doll said. I'm trying to decide whether they must've used the same stock audio, or whether the game makers did it on purpose as a joking tribute.

John Adams 5 Feb 2009 04:31
4/4
Yes, it does say "Islam is the light." I would be opposed to any toy that delivers a religious message without this fact being clearly revealed prior to purchase. However I wonder if there would be all this concern if the baby had sad "Jesus is the light." Let's be honest.