Lara Croft not just getting a dust down for games 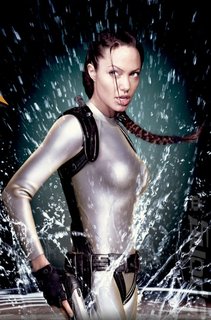 Love the silver lycra...
Following statements from Eidos indicating that Tomb Raider is set for a 'reboot' in the world of gaming, it looks like Lara will be getting a 'reboot' on the silver screen, too.

Warner Bros has obtained the film rights to the series and is working on a fresh project with Dan Lin, a producer whose credits include The Departed and Terminator Salvation.

The new film is expected to wipe the slate clean with a new origin, villain and a new love interest.

The project is still in the very early stages of development, so don't expect any casting for your favourite busty archaeologist just yet. There hasn't even been a writer or director attached yet.

Recently Robert Brent, CFO at Eidos, has said that the company is considering a "Batman-style" reboot of Tomb Raider for the next game.

That Warner Bros is handling the next film will come as little surprise to games industry observers. The company owns a stake in Eidos and is the best bet as the company interested in buying the Britsoft publisher outright.

Angelina Jolie played Ms Croft in the two previous Tomb Raider films. SPOnG could (happily!) see Megan Foxx as the new Lara, while Michelle Ryan (Bionic Woman) has shown she can do action and has one of those English accents (but is she quite sexy enough?) Other favourites at SPOnG are Kate Beckinsale or Rhona Mitra, who was the first 'real life' Lara Croft and has been all actioned up recently with the likes of Underworld: Rise of the Lycans.

Finally, we love the word 'reboot' and its use in anything vaguely computer related... it's just so 1980s/Matthew Broderick. Can any readers help us find more phrases that marketing people can use to write about video games? Send them to the Forum.