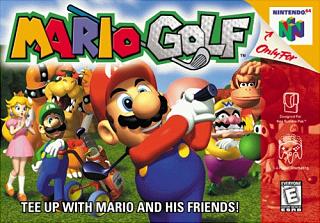 It's that day after Thursday but before Saturday, which means it's time for some Wii downloadable lovin'. This week, it's Mario Golf and Wonder Boy in Monster Land on Virtual Console.

What do you say about Mario Golf? It has Mario in it, playing golf. This particular version was first released on the N64 in 1999. We'll pass you over to Nintendo - "Get practising that swing! Mario Golf is a sophisticated golf simulation packed with fourteen playable characters, each with their own power and swing styles.

"You can even taunt opponents to break their concentration! With ten different modes, including Tournament, Speed Golf and even Mini-Golf, players can stroll through six different courses by earning Experience Points." It will set you back 1,000 of your Wii Points.

Wonder Boy in Monster Land, after appearing in Arcades, was released on the Master System by SEGA in 1987. So - you've got a dragon running Wonder Land, monstrous henchmen and a young lad in a loincloth. If there was any doubt in your brain - it's up to you to guide Wonder Boy through sometimes labyrinthine platform levels to save the day. You can do that for 500 Wii Points.