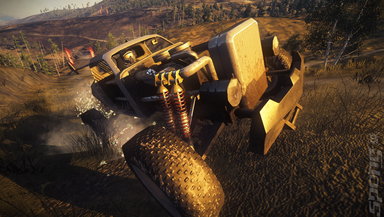 Fuel
All Images (3) »
David Brickley, the executive producer on Codemasters' upcoming open-world racer, Fuel, has said that the first MotorStorm trailer led to a "comedown", saying that he was "shocked by the limitations" when he actually played the game.

Speaking with Videogamer, Brickley said, "You look at something like MotorStorm and then get the lessons from it, but really it's a whole other offering to say that CG movie is never a reality, or that freedom or that drama or that spectacle. Those are great lessons but we didn't have to be constrained by having to have a turbo system. You try going ten feet off the racing line in MotorStorm and you're back where you were."

Elaborating, Brickley went on, "I think everybody must have thought that first video was so shocking and so spectacular. I confess when I imported it from Japan and then sat down and played it I was shocked by the limitations. Not to say it wasn't a great game because it was, but that video, along with the Killzone one, set out to get attention. By God it did that. I think anything after that was going to be a bit of a comedown. To be perfectly honest when these guys come up with an engine that says we can render by an order of a magnitude bigger than anything that's gone before, then it's like, OK, we're going to have to approach this in a completely different way."

This is not, of course, the first time that the MotorStorm FMV has attracted criticism. In fact, said criticism has provoked the game's lead designer to come out cussing in defence of the game.

Codies and developer Asobo are promising masses of freedom in Fuel, with 5,000 square miles of terrain supposedly at your disposal. Read more on it here.

jkl 17 Jul 2009 00:04
3/3
FUEL was enjoyable, but motorstorm pacific rift is better, he doesnt know what hes talkin about.
Posting of new comments is now locked for this page.