Irish company brings a classic back to life. 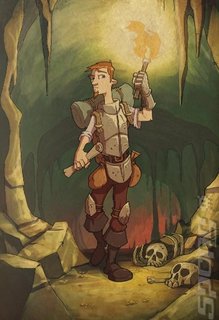 All new! All good.
All Images (2) »
Those of a certain age - and particularly good taste - will remember the greatness that was Zork. Such was its greatness that a professor from Stanford even made it one of the ten most important games ever.

For those too young to recall it, Zork was an adventure game that originated in the 1970s (yes, the 1970s) before it was translated to the home computer by Infocom.

How did you play it? You typed words using a keyboard and your C64 or CPC would then do magic and take you through the story. Yes, typing. You could not use words like "noob" or "lamer" or "w00t". You could use words like "North" or "Get cape" (well, words like that).

Well, Dublin-based Jolt Online Gaming is bringing Legends of Zork to the world of online gaming. We are told that, "LegendsofZork.com will provide online gamers with a persistent online adventure, playable from any Internet browser.

"Players take up the role of a recently laid-off salesman and part-time loot-gatherer, as he explores the Great Underground Empire. Designed to provide gamers with a casual MMO game they can play on their laptop, desktop or Apple iPhone (in school, work or on the bus), there?s nothing to download, just go to www.legendsofzork.com"

There you go. Some elder SPOnGers now want Knight Orc and all Level 9 games to be reprised in a similar way.

Way 19 Jan 2009 15:51
1/1
Ahh, those were the days. But then again, I thought Zork was based on a previouse non-pc game (not actually the game). First computer game recorder around 1953 (vector monitor some sort of ball sports game) by one of the inventors of the atomic bomb (figure how I know that one).