Did it jump or was it pushed? 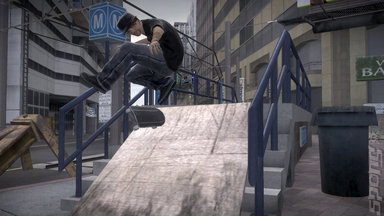 Joel Jewett, co-founder and president of Neversoft, has confirmed that his company is no longer working on the Tony Hawk franchise.

This comes via Great Falls Tribune in Montana which, in an article on Jewett, reports "the company has let the Tony Hawk series go to another developer". Jewett then comments, "It's probably best for the franchise ... it's time for someone else to add fresh ideas to it".

A less generous interpretation would be that Activision saw its skateboarding property suffering and decided Neversoft wasn't up to dealing with it.

It was rumoured a while ago that Neversoft was moving on to pastures new. At the time, it was said that start-up independent developer Robomodo was taking the reins on Tony Hawk. This remains unconfirmed, but the company's website tells us, "We are currently working on a high-profile extreme sports title for Activision Blizzard." Seems like a good bet that Tony Hawk is it, eh?

Activision has said in the past that it plans to give the Tony Hawk series a serious makeover, with it having been hinted that PS3 and Xbox 360 balance board peripherals are in the works for the franchise.

Neversoft created the Tony Hawk series. According to Jewett, the franchise has now reeled in $1billion in sales.