Much coveted and all that guff 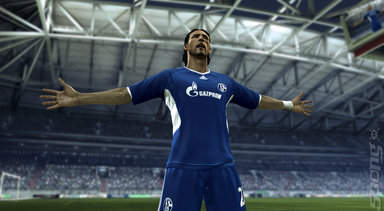 Soccer Fact: Christ played three games for Hartlepool United in the mid-1970s.
Bloody Hell! It's here! The 'much coveted' Christmas Number 1 in the Gfk Chart-Track all formats UK video game charts is in. Hold on a second. Isn't coveting things around Xmas time blasphemous or somesuch. Let's start that again.

Electronic Arts' FIFA '09 soccer-kicking video game has - as we suggested it would be while the professionals had COD: WaW down for the top spot - gained the Xmas Number 1 position. Ha!

According to Chart-Track the footy game saw an 89% rise in sales in the past week to attain supremacy. Just the sort of 'monumental effort' required according to Ladbrokes' spokesman, Nick Weinberg.

Also, according to CT, "EA?s Need for Speed: Undercover makes sure of holding on to the No4 position as retailer discounting helps sales climb 27%". Frankly, having played it (here's our review, "Why, in a world where Burnout Paradise exists would anybody feel the need to make this crap, let alone buy it. 42.3%), we can't see how it got to Number 44.

Nintendo can be proud of its achievement however. When you look at the chart - below this tale - you'll see that 50% of the Top 10 comprises Nintendo games. That's versus one from Eidos; two from EA; and two from ActiBlizz (or BlizzyVision or ActiVendi or whatever the hell it's calling itself today).

We were going to bother talking about what's coming out next week... but frankly, you'll all be playing Tomb Raider Underworld on the Xbox 360 that your aunty bought you.

SuperSaiyan4 23 Dec 2008 13:57
1/5
Amazing what happens when you drop prices of games but I guess being a multi platform title with millions that love the Fifa franchise I guess its no suprise that its no.1
Its shame when games like Fallout 3, Dead Space etc that are top titles don't make it.

Make It Stop!!! 23 Dec 2008 14:23
2/5
SuperSaiyan4 wrote:
Amazing what happens when you drop prices of games but I guess being a multi platform title with millions that love the Fifa franchise I guess its no suprise that its no.1
Its shame when games like Fallout 3, Dead Space etc that are top titles don't make it.

1) Not it is not amazing what happens when you drop the price of games. Idiot.

2) No it's not a shame that games like 'etc' didn't make it. Fallout 3 and Dead Space are games aimed squarely at the hardcore gamer. The Holidays have always been a time when the non-hardcore gamer ventures into polled retailers and purchases video game titles. For f**k's sake, it's games like FIFA an Wii Fit that enable publishers to produce niche titles like 'etc' in the first place. It would be a crying shame if they didn't make it because it would indicte that game sales were down and the industry was suffering. Get a f**king idea.

It also explains why dross like NFS:U gets into the Top 10. At leat I hope it does... someone should put Sonic in that f**ker and drive them both off Mount Rushmore, that'd be worth watching.

OptimusP 23 Dec 2008 14:37
3/5
Well, you're wrong too
Fallout 3 and Dead pace ar meant for the Testosterone Gamer who is not by default the hardcore gamer. There is overlap, sure.
Also, Christmas period is not the specific period when non-testosterone games get into the polls, WiiFit, Mario Kart Wii and WiiPlay have been pratically been in the top ten the entire bloody year since they were released. Brain Training is the one where this logic maybe fits the most, but seeing it's like 3-4 years old...where's the logic that is now in the top 10?

Don't bother asking game-journo's for that, they don't know either. Instead, read Dr. Christensens books about Blue Ocean and Disruptive Strategies. They contain some wonderfull new type of thinking and seeing...the whole of history!

tyrion 23 Dec 2008 15:16
4/5
SuperSaiyan4 wrote:
I guess being a multi platform title with millions that love the Fifa franchise I guess its no suprise that its no.1
That's a good point. Looking at the individual formats chart, the first SKU of FIFA'09 is the 360 version in 7th place, just ahead of LittleBigPlanet. The next is the PS3 version at 11, just after Gears of War 2, then the PSP version in 39th place.

If Chart-Track did the Christmas number one based on individual formats, it'd be Mario Kart Wii, a game that's been on the charts for 37 weeks!

I won't be, would have been but it was out of stock.