But what's going on? 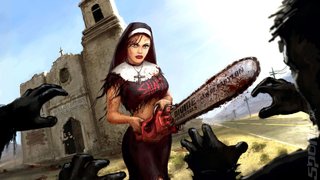 Art from TimeSplitters 4
By Mark Johnson

Rob Yescombe, screenwriter for Free Radical, the Rare-spawned developer behind the TimeSplitters franchise and Haze, has told SPOnG that widespread reports of the studio's closure are not true.

Asked the question, "Is it true that Free Radical has shut its doors?", Yescombe responded, "Nope, not true." He declined to comment further on the situation at the developer, however.

While Free Radical may not be facing wholesale closure, something is clearly going on at the studio. Reports of its demise cropped up over on a forum, with a poster claiming, "The locks were changed yesterday, and security is outside the offices not letting people in." The source, however, is someone from the Holiday Inn next door to the offices.

Such a sudden refusal of entry to staff suggests a lock-out by the office's owners, rather than a decision by management.

SPOnG has tried to contact Free Radical front desk and currently phones there are not being answered.

Furthermore, it's being reported that the 'Secret LucasArts Project', which still appears on the Free Radical website, was taken elsewhere by the American publisher some months ago. Rebellion is said to be working on the title.

Meanwhile, Haze was poorly received and no publisher has been announced for TimeSplitters 4.

We'll bring you more on this as it develops.

seriously tho it's a travesty if FRD goes under - they've done nothing but great games. ok haze wasn't up to their usual standard - i thought it felt rushed and the pre released hype killed its impact - but frd are teh heart and soul that rare hasn't managed to show since Goldeneye

The company is in administration. It hasn't closed.

Welp 12 Mar 2010 02:36
8/8
Suck it. Time Splitters was a s**tty series. It didn't do anything but cobble together ideas from other games into a horrible mess and the rampant fanboyism was annoying. Go play a good game instead.
Posting of new comments is now locked for this page.