Another Sierra title snapped up 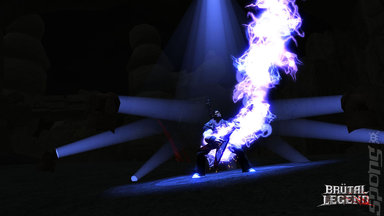 Electronic Arts has picked up Double Fine's Brütal Legend, one of the lost Sierra titles.

?This is awesome news!? stated Tim Schafer, president of Double Fine. ?The quality and creativity of the games EA Partners has been involved with make it a perfect home for our baby, Brütal Legend. Some people were starting to wonder if the saga of Eddie Riggs would ever see the light of day, but now I think it?s clear that this game, like Metal itself, cannot be killed!?

Indeed, folks would have been justified in wondering just that. The game had been hanging in limbo since July, when Sierra, then freshly-absorbed into Activision Blizzard, let slip that a fistful of titles were no longer in its publishing line-up. Since then, other titles from the list have been picked up by the likes of Atari, Ubisoft and THQ.

?Brütal Legend is shaping up to be a creative tour de force,? said David DeMartini, Senior Vice President and General Manager, EA Partners. "At EAP, we are deeply committed to giving the industry?s elite independent developers a platform to launch their creations to a worldwide audience. Tim Schafer is known for some of the richest stories and characters in our industry, and with Jack Black offering his vocal styling?s for Eddie Riggs, we are extremely excited to help Tim and his talented team at Double Fine see their vision come to fruition.?

Brütal Legend tells the story of the aforementioned Eddie Riggs, a roadie drawn into a world of Rock 'n' Roll folklore who sets about building an army of Metal Heads.