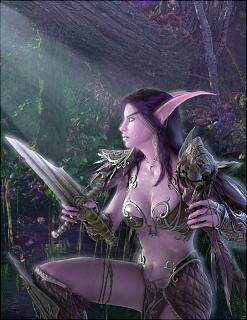 Finally, Blizzard has launched a new service to let confused gamers change the sex of their World of Warcraft characters. Along with your name, face, skin colour and other cosmetic features (such as "tauren horn styles or a night elf's facial markings"), that is. All for just $15 (Ł10) plus tax! Unfortunately, it would seem the service is broken.

Many users have reported their payment having been accepted for the service, but no customisation options having been made available to them. Blizzard has posted a handful of steps that might help those affected get past the problem, but if that fails users are advised to contact the billing department. Which opens in four hours...

So, you pay a tenner for a service that could be made available for free with just a minor patch, then Blizzard swallows your money. Brilliant! But once that's all sorted, you can change your character as much as you want, right? Wrong. You'll have to pay all over again. It's the same deal if you want to revert back to your original name and appearance.

But you get new options that weren't available at the character creation stage, right? Nope. You get exactly what's offered to new users.