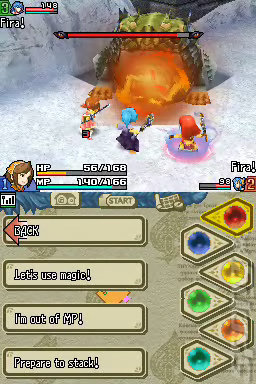 All Images (4) »
Square Enix has confirmed that Final Fantasy Crystal Chronicles: Echoes of Time is coming to Europe this Spring. The publisher dubs the game, "the world's first cross-platform multiplayer adventure for the Nintendo DS & Wii systems".

The title will enable up to four users to play online, regardless of whether they're using a DS or Wii. The technology making that possible has been dubbed the Pollux Engine.

Up to four players can use Nintendo's Wi-fi connection in any configuration of systems. Alternatively, up to four DSes can play together using wireless functionality or one Wii can host three DSes. Square hasn't said much about how the cross-platform play will work beyond that, but it sounds suspiciously like players of the Wii version will be getting a hobbled experience to make it compatible with the less-powerful DS.

The game will follow in the style of previous Crystal Chronicle games, one aimed at making the series accessible to a broader audience than traditional Final Fantasy fare.

You can catch some screens below and find more, along with more information, over on SPOnG's dedicated game page.
Companies: Nintendo Square Enix
Games: Final Fantasy Crystal Chronicles: Echoes of Time