Plus: shooter closes in on 3 million sales 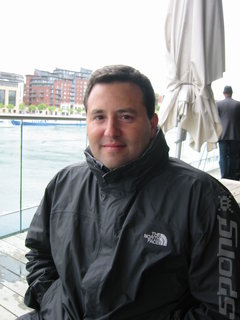 Mark Rein
Mark Rein, VP of Epic Games, has responded to what he calls a "negative rational (sic)" for Gears of War 2 sitting in second behind Halo 3 in the Xbox Live rankings.

This came in response to a poster over on the official Epic forums who said, "XBL stats are up and gears is in second already. this means less cash and actual decline in sales now and in the future".

Rein essentially pointed out that... well, Halo 3 is Halo 3 and everyone should just learn to deal. "Wow, didn't take long for somebody to turn Halo's huge popularity into some sort of negative rational for Gears2 but you'd have to apply that same negative rational to every single game on Xbox Live as well", Rein said.

"Gears is in second because Halo 3 has been out for over a year and a half and has probably sold nearly 9,000,000 copies by now. So when they offer reduced-priced multiplayer DLC users come back to the game and they get a spike in their user base that drawfs (sic) ALL of the other games on Xbox Live - especially new games that have only been out for a few weeks such as Gears of War 2 and Call of Duty: World at War. But being in second is still pretty amazing considering we've only had the time to sell a small fraction of the numbers they have sold", he continued.

The numbers in question also got a mention over on the Major Nelson podcast. ?I think they?re pushing 3 (million)?, Microsoft Game Studios boss Phil Spencer said of Gears 2. The game sold more than two million units worldwide over its launch weekend.

You can read more about Epic's latest shooter over on SPOnG's dedicated game page.

And I took back COD 5 and got COD 4 again best shooter online imo is COD 4!

Logic 8 Dec 2008 12:27
2/6
So, Mark Rein spoke logic to the comment, why is that news? The headline could have easily been spun to read that Gears, with not even a quarter to the sales of Halo 3, lead the XBL charts for weeks before the reduced price DLC. Seriously, to be in 2nd on Live is HUGE considering the number of games on the market. I'm still playing both games (and COD 4).
more comments below our sponsor's message

SuperSaiyan4 8 Dec 2008 13:56
5/6
haritori wrote:
SS4 your are a tit, COD4 over COD5? if you prefer corridors and everyone using the same damn M16, over larger maps and variety of weapons then so be it, but you are still a tit!

I went many game stores in the area where I live and they were all selling COD 4 faster than 5 in fact I wasn't the only one taking 5 back for 4...

COD 4 is my sort of online shooter, I didn't like how 5 played but then again I don't like World War shooters.

youre_all_retarded_anyway 8 Dec 2008 17:02
6/6
COD5 is the worst multiplayer game I've played in a while. COD4 kicks it's ass a thousand times over. haritori, if you think that COD4 is all about M16s and tiny maps, you either didn't play long enough to make any judgement or you just like to bitch too much.

More importantly.. gears2 is much better than halo 3 in every way. Who cares if it's sold more copies and has more players? ITS BEEN OUT FOR A F**KING YEAR. How long has gears been out?