Christians: Army of Two Too Gay 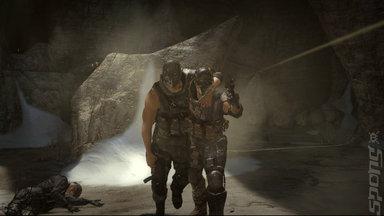 Army of Two - cuddling horror.
The Timothy Plan, a Christian mutual fund investment service in the US, has published information on "offensive" games from this year to help responsible parents in their gift buying for youngsters. It happens to think Army of Two is totally gay, too.

Yes, 'Gay and Lesbian' is one of the categories that makes games offensive. The Timothy Plan says of Army of Two:

"Homosexual Themes: Although never spoken of, undertones of homosexuality are present. Weaponry in the game can be decorated to be anything from diamond encrusted to gold plated. You share a parachute, and the riot shield system allows one player to use a shield or car door as portable cover while the other cuddles up close behind and dispenses 'lead' from his 'iron'."

If there weren't gay themes in the game before, there certainly are now.

Of course, Army of Two does not come top of the list. That honour goes to (you'll never guess)... GTA IV! What, you guessed?

So, why is an investment fund publishing such a list? Just because fund-amentalists need to know! It "employs specific moral screening criteria designed to avoid investing shareholders' money in any company that has a pattern of contributing to the cultural degradation of our society."

So, that explains it! Except... There still doesn't seem to be a good reason for an organisation that deals with finance to be publishing consumer guides, however Christian it is.

Don't think you're being told what to play, though! The site notes (in bold lettering) "This is not an attempt to ban video games, or dictate whether people should play them. This is purely meant to inform parents who are concerned with the moral content/issues contained in video games and make available to them information which is not easily found."

So, it's more like a public finger-pointing. Since the Timothy Fund considers this information to be "not easily found", it obviously doesn't think the ESRB is doing a very good job with its ratings.

If you didn't feel insulted enough at the idea that a video game with homosexual themes was in some way bad, you can also feel patronised too, "We understand, with this being a controversial issue, that some may not agree with more complete information being made available to those without the time, temperament or even talent to completely research the content of the wide array of video games presently available", the Plan states.

"However, we hope all will respect the rights of everyone to raise their children in a way they feel best matches their values and beliefs."

We do too. Gay people, unmarried people, black people and white people... all sorts of people.

You can see the document for yourself over here.
Games: Army of Two Grand Theft Auto IV

Was p 6 Dec 2008 19:52
2/7
Clearly, according to this list, there aren?t enough demonic games around.
Any suggestions?
more comments below our sponsor's message

I have seen no gayness in GTA 4 either.

OptimusP 8 Dec 2008 09:11
4/7
So, if two people sharing a shield in combat situations is gay...what is one guy making twelve other guys follow him everywhere for the rest of their lives and saying nothing but nice things about that one guy?

OMG the Bible is the preaching of gayness!

Really, this is the way to combat this kind of ludicrous assesments. Go daily show on their asses.


Onward christian soldiers, you are all gay now.

saintmarc 11 Dec 2008 01:01
6/7
that is what they found offensive about that game? that is the least of the problems. i kiss everyone on both cheeks when i greet them, male or female. that doesn't say anything about my sexuality.

FagMan 11 Dec 2008 12:25
7/7
saintmarc wrote:
that is what they found offensive about that game? that is the least of the problems. i kiss everyone on both cheeks when i greet them, male or female. that doesn't say anything about my sexuality.

That is what they found offensive. The running around the place killing people and making your living as mercenaries bit is apparently fine.

The logic is therefore...

Shooting people in the face = good.

Shooting people on the face = not good.